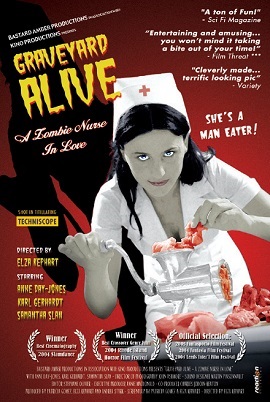 Graveyard Alive follows the story of Patsy, a lonely, dreamy nurse who, after being bitten by a zombie, becomes a flesh-eating sex kitten. With her newfound powers, she tries to win back her old flame, the suave and handsome Dr. Dox, from Goodie Tueschuze, a bitchy young nurse. Shot in titillating Techniscope, Graveyard Alive is General Hospital meets Night of the Living Dead!