Patricia Gomez Zlatar was born in Chile, eventually settling in Montreal by way of Pennsylvania. Patricia worked several years as a scientist before opting for a career change to film and forming Head on the Door Productions, a company dedicated to the horror and fantasy genres.

Her credits include the features Graveyard Alive - A Zombie Nurse in Love, Go in the Wilderness, and SLAXX, as well as the shorts The Chosen Ones and Never Tear Us Apart, which was included in the horror anthologies Minutes Past Midnight and Blood Clots.  She is currently producing the shorts Maiden Mother Crone, and They’re Here.

Patricia is also creating a vampire television series titled Sweet Blood, which was selected to the Torino SeriesLab, and pitched at the Series Mania Co-Production Forum in Paris.

Patricia has occasionally been known to moonlight as an assistant accountant in the film industry. Her recent credits include Murder Mystery, The Moodys, and the Home Alone reboot. 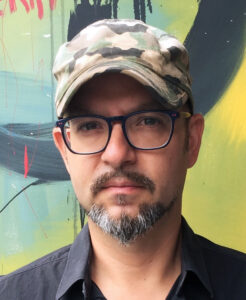 Sid “Santiago” Zanforlin is a Chilean Canadian that grew up in Montreal and a sucker for well-crafted genre (sci-fi, horror). He is a CFC graduate with a background as an Iatse cameraman, theatre director, writer/director of many shorts, music videos and countless eps of true crime shows.

Sid Zanforlin has won a Mecca award for “Theatrical Revelation” of the season for the play Jesus Hopped the A Train, has been nominated for a Banff Television award for Best Children’s program (Prank Patrol), his shorts Attack of the Brainsucker and Never Tear Us Apart have won many awards including Best Short at the Fantasia Film Festival and his music videos have been on display at various museums including the MAC.

His work has also been included in two horror feature anthologies called Minutes Past Midnight and Blood Clots that have had theatrical release in North America and are currently on Hulu, Amazon and Shudder.

Sid Zanforlin has recently been the co-show runner for the true crime Discovery series Fatal Vows, has received Sodec development for his psychological feature Santa Clara, has a TV project in development with Anne-Marie Gelinas (Beans, Turbo Kid) and has been teaching acting for Actra and at Weengushk/Brock University.